Here in the office, we are big fans of a few things including: the Indiana Hoosiers, Indiana Pacers and Indianapolis sports talk radio.  Specifically you can find our pals Dan Dakich and Producer Kyle being blasted daily from 12-3 on 1070thefan.com

Recently we were asked to help create a one of a kind plaque commemorating a big event for our friend, Kyle Knezevich.  On February 13th, Kyle had the opportunity to interview Mike Tyson.  Kyle has been a Golden Gloves boxer and has long looked up to "Iron" Mike's fighting style, this interview was a huge milestone in Kyle's career.

Without hesitation we jumped at the opportunity to create something for our friend.  With the idea stemming to use Iron (for Iron Mike) and Steel (representing Kyle's favorite football team, the Pittsburgh Steelers) for the frame, the creator of this gift supplied us with the base  and Ashley was given free range to do the rest.  After listening to the interview again, Ashley knew she found the quote she wanted for the back.  After looking at Kyle's pictures from his days boxing, Mike Tyson told Kyle:

“Isn't that an incredible feeling?
That's an incredible feeling.
Listen, I respect anybody,
I don't care if you've been knocked out 99 times,
anybody that tries real hard, that goes into this thing...
there are so many idiosyncrasies that's going on.
More than just throwing a
punch, so much is going on in here.
This is where a fight is won and lost.
Right here, the guy is always bigger, stronger…
everything than you and somehow you win.
And that's what fighting is, a metaphor for life.”

Interviewed by
The Great
Kyle Knezevich 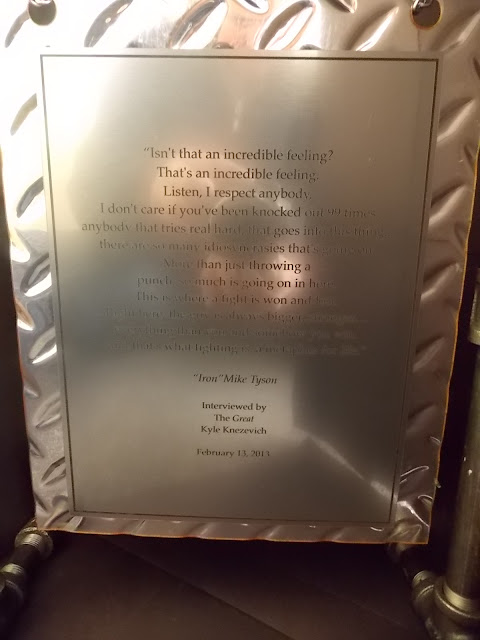 Thanks for letting Naptown Etching be a part of such a special gift!